Charting the history from the start.

Charting the history from the start

From the earliest years, cricket was played in the college as the main summer game, as Fr. Maher’s College History testifies.

Cricket is mentioned from the earliest descriptions: ” … Alongside the avenue, there is a field of sufficient size to allow the playing of ‘football’ and ‘cricket’.”

The Leinster Cricket Club in Rathmines (L.C.C.) was already almost forty years old when the doors of St. Mary’s College opened for the first time in 1890. A St. Mary’s Prefect (clerical student), a Mr. Ned O’Shea was known as “Sixer” O’Shea after a match he played in 1899 with the Blackrock Staff against the Leinster C.C. in which he hit eight sixes. (In those days St. Mary’s, having been founded from Blackrock, was still considered simply a branch college). The Senior Cup was won in 1916. Alas! The early cricketing promise of St. Mary’s suffered a severe setback when the College had to close in 1916. The premises became the Senior (CSSp) Seminary. It seemed the end of the road for St. Mary’s. Where was the point in keeping records and chronicles? So, many archival records were lost. A past-pupil’s cricket club flourished in those pre-closure days. 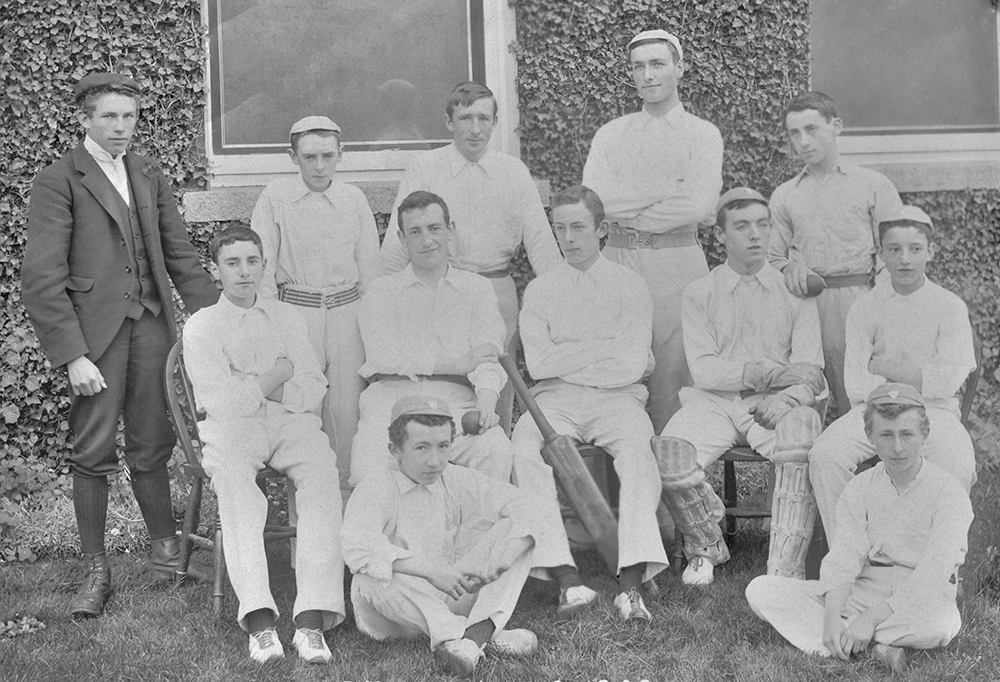 The 1898 St Mary’s Cricket team, which contains a couple of prefects.

Brief biographies of some of the boys who were in the college in that decade (1890s), mention that they were proficient in rugby or cricket. We have a newspaper account of a junior cricket match with Blackrock in the middle of the decade. The match was played at St Mary’s and resulted in a win for St Mary’s, 72-45. Notable in St Mary’s team was John Dudley Digges who went on to become one of the founding players of the Abbey Theatre and carved out a niche for himself as a character actor on the New York stage and in Hollywood films. Also on the team were Dan Molony and Joseph Dwyer who were ordained for the Dublin diocese, and George Arigho whose grandnephew became a Holy Ghost Father and his nephew a stalwart of St Mary’s RFC. 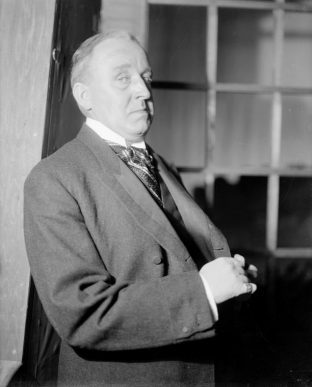 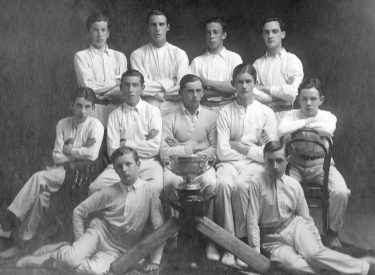 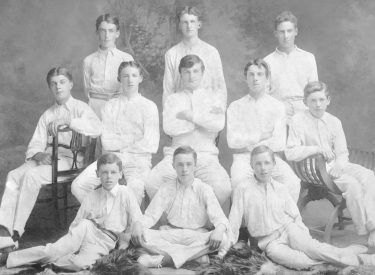 Cricket continued to be the number one summer sport, although tennis was also played, and the school continued to produce excellent individuals at the game without coming up with a sufficiently strong team to wrest the trophies from the Protestant schools in Leinster who ruled the cricket roost. That is, until 1916, the final year of the school’s first existence. That year it all came together just right and St Mary’s won their first ever cricket trophy, the Leinster Schools Senior Cup.

“decided to admit St Mary’s College, Rathmines, and Belvedere College, to the Cup competition for the season”

They had entered the Leinster Schools Cricket League and Cup in 1905 only. In April of that year the Committee of the Leinster Cricket Union “decided to admit St Mary’s College, Rathmines, and Belvedere College, to the Cup competition for the season”. Both Colleges were to produce excellent cricketers down the years and memorable battles on the field, with each other and with other schools. That 1916 Cricket XI, captained by Bobby Donovan, contained three Inter Pro players, R. L. Donovan, who captained Leinster too, Gabriel Cussen, and Arthur R. Rose. They met St Columba’s in the final. 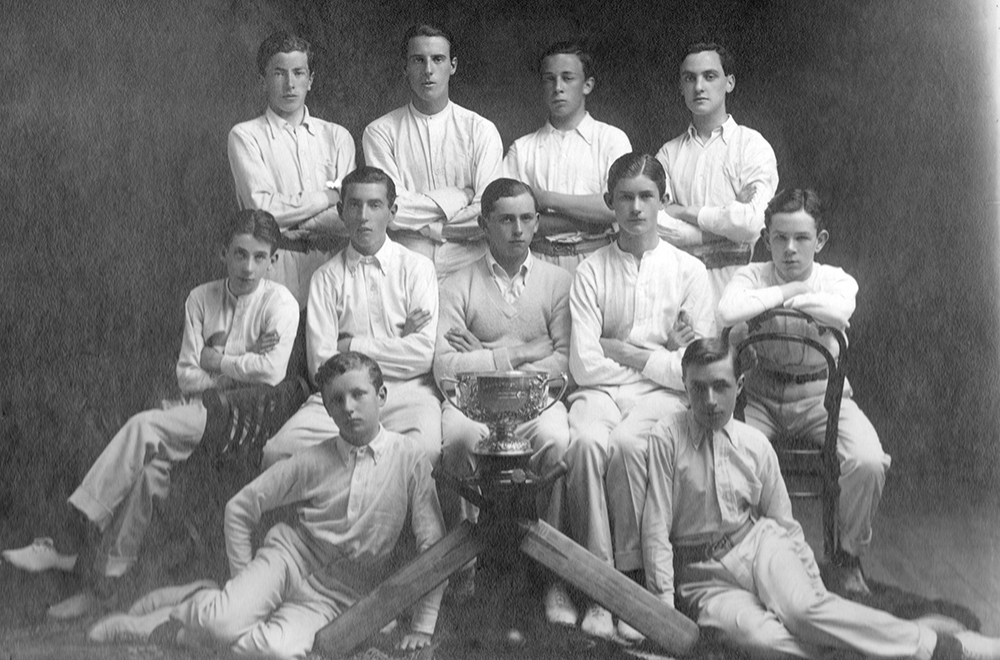 The Irish Times 1916, describes the match:

Low scoring marked the closing stage of this match which ended yesterday at Rathmines with a win for St Mary’s College by four wickets. Overnight, St Mary’s led on the first innings by just one run, and with eight of the opposing side dismissed in their second innings for sixteen, an easy victory for St Mary’s was predicted, but the last two batsmen doubled that score, and ultimately the venture yielded 33 runs. Donovan and Rose again bowled finely, the former taking 5 for 11, and Rose 4 for 21. St Mary’s then needed only 32 to win, but with six wickets down for only 5 runs, they did not look like attaining them. Donovan, however, with a fine innings of 33 (7 fours) saved the situation. Indeed, he was the only batsman of the eight who went on to score, the other runs being from a wide! King, bowling magnificently, took four wickets for 2 runs, G.Symes 2 for 28. 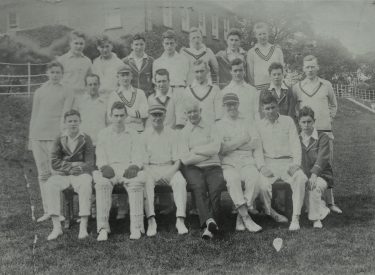 Past vs Present Teams 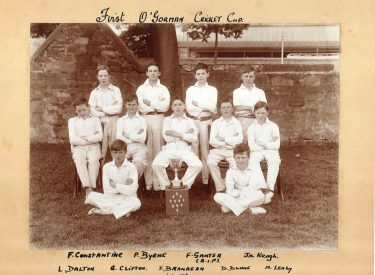 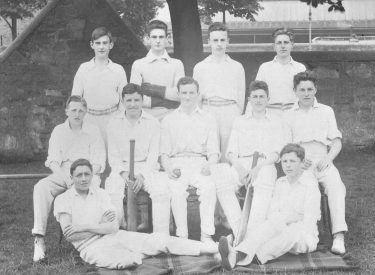 When the College re-opened in 1926, cricket’s importance was soon almost on a par with rugby. The annual O’Gorman Cup was often won against Blackrock. Cricket was re-established as the main summer game. It became so popular that when the first group of students left the college, they felt the need of re-starting a cricket-club. Under such enthusiasts as Charlie Wilson, Paddy Branagan, Gerry Boyd and his brothers, the Clifton brothers and many others, they soon had a club going, under the inspiring name of “The Optimists’.

They played under this name for some years and then gave themselves a new constitution to become the St. Mary’s College Cricket Club. Boys leaving school in those days naturally joined this club. They had reached second senior ranks in Leinster, when in 1946, due mainly to transport difficulties as a result of the war which prevented easy access to their ground in Templeogue (the old Leinster Hockey Union ground) especially for practice, they were constrained to close.

But nearby Leinster Cricket Club, founded in 1852 had always attracted some past-pupils. Ray Molloy (‘Ram’) of Rathgar was a member of the Leinster Club from his early days until his death in the late ’40’s. He had the pleasure of leading past students cricket teams against the newly re-opened college for several years in the ‘30s. Frank Reddy left St. Mary’s for C.U.S. in 1916 when the College closed. He got his first of many Irish caps in 1924 as a member of the L.C.C. and served the club very well afterwards. He played a fine innings of 123 against Trinity C.C. in 1950 when the LCC made the record total of 531 for 1 in a weekend of memorable cricket (Trinity scored something like 300 runs).

George Nash, son of Con who kept wicket for Ireland, joined the LCC from St. Mary’s in the early 30’s. So did Val Buggy, a fine left-hand bowler who figured for several seasons on the First Xl and in the post-war period led several teams against the President’s Xl in exhibition matches in College Park. The most outstanding players in the early 1940s were the Scott brothers – Martin, Fred and Willie. 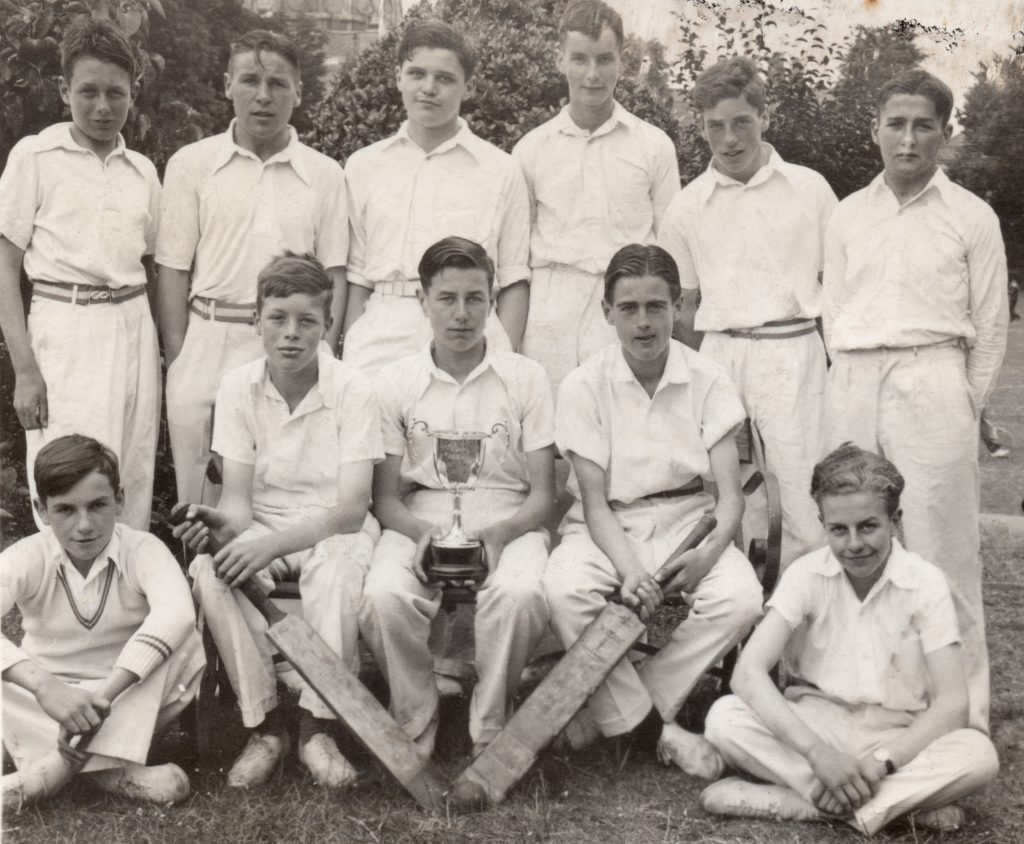 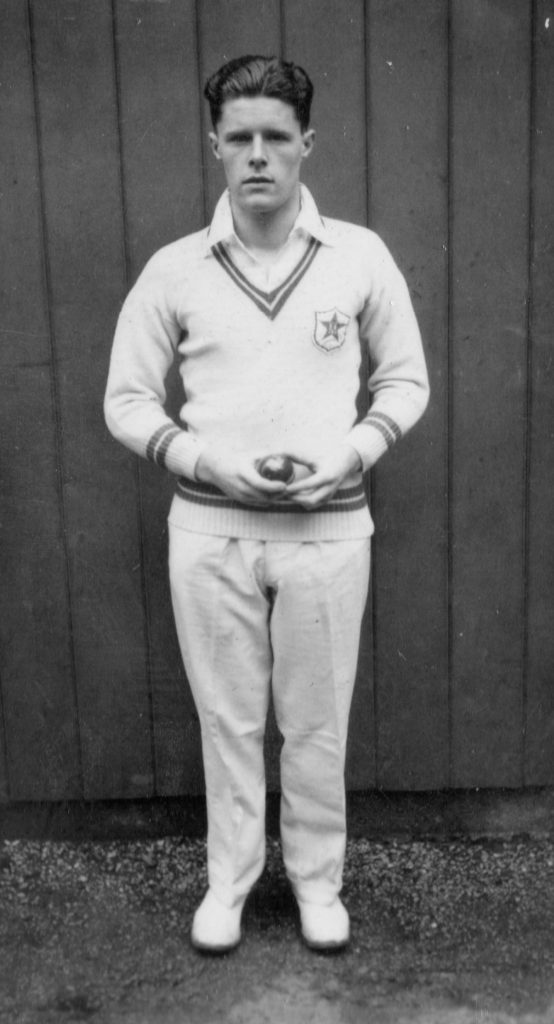 Fred Scott, who captained the Leinster Schools in 1939, and might easily have had an international career in the game if he had elected to join Leinster or some other senior cricket club rather than throw in his lot with St Mary’s C.C. which had only intermediate status.

Cricket began immediately on the resumption of school every year after the Easter holidays. Pitches were laid out both in the front field and the back field by Fr Sexton and the prefects. Belvedere and Terenure were the most frequent opponents in 1929. Belvedere won 46-42 on May 23 and Terenure on May 26. There were four matches in June, two against Belvedere, one won, one lost; two against Terenure, one lost on June 23, one won by an innings on June 27. On June 20 the Annual Past v Present match was inaugurated with a win for the Present, 137-59. But it must be noted that the Present were bolstered by the presence of Doc O ‘Neill and two prefects, Kevin Devenish and Tom Clerkin, for the occasion. The good Doctor may have lost some of his suppleness and fleetness of foot, but his technique and power were as devastating as ever.

1929 was an important year in sport for the school. We have already seen that it was the year in which they re-entered the Schools’ rugby competitions. For cricket it was memorable for the presentation of a Perpetual Cup for competition between the U-14s of St Mary’s and Blackrock Day-boys. It was presented by Fr Denis Joy, a Holy Ghost missionary in Sierra Lecme and named the O’Gorman Cup after the Holy Ghost Bishop of Sierra Leone, Bishop John O’Gorman. That competition was the outstanding cricket fixture between the sister colleges but has been in abeyance now for many years. The inaugural competition in 1929 was won easily by St Mary’s, captained by Jack Branagan, who went on to become a Holy Ghost misssionary in Kenya.

In the Summer of 1932, a group of students decided to form their own cricket club. They wanted to continue playing cricket during the holidays, and the only way to do this was to form a club and affiliate with the Leinster Branch of the Irish Cricket Union. In this way· they would have entree into the Leagues and Cup competitions at various levels. Early in July they met and formed the ‘Optimists’, leasing a ground on the north side of the City.

Everything was financed from the members’ own subscriptions. This was the beginning of the Past Students Cricket Club which was to flourish for the next fifteen years. In those days, whist drives were a favourite way of raising funds for any worthy cause, and we find the ‘Optimists’ staging a whist drive in the college hall in January 1933, which was reported as being very successful. Charlie Wilson was the first Hon Secretary, 1931-32, followed by Matt Collison 1932-33, and Gerald Branagan 1933-34. At the end of April, the Present beat the Past by just one run in the Annual Match, and in June, the O’Gorman Cup was won once again by St Mary’s.

In May 1930 it was decided to play a cricket match with the present pupils of the school on June 7 and to hold a Garden Party on June 15 in the Clydagh Hotel, Greystones, where a meat tea would be provided (3/-) and games of different kinds, clock-golf, tennis with prizes of cigarettes, chocolates and golf balls. 58 acceptances were received for the event which was a great success.

In October 1932 the union decided that the rugby club could become affiliated to the union by payment of a fee of one guinea. This would entitle the club to a seat on the union executive committee and put it in line for a grant from the union. In return, the union would have a seat on the rugby club committee. The ‘same arrangement was agreed for the cricket ‘Optimists’, provided they changed their name to St Mary’s College Cricket Club.

In the Minutes of February 7, 1933, it is noted that the applications and contributions had been received from both clubs and that grants of £10 each had been forwarded to them.