Cup Triumphs and the visit of a legend

When Mr. Frank Barry CSSp came as prefect in 1938 and when he returned as priest in 1944 the game received a great impetus. He became renowned in Leinster cricketing circles and among our alumni. The fine liaison with Leinster Cricket Club, that still persists, was established. 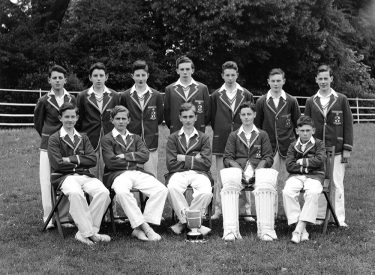 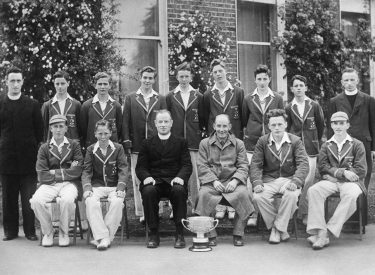 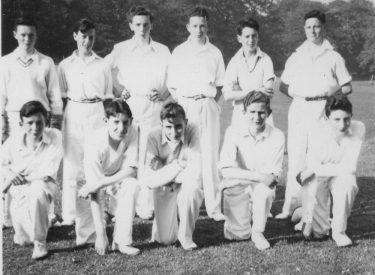 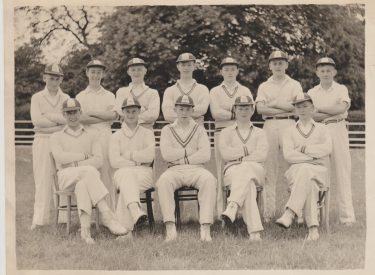 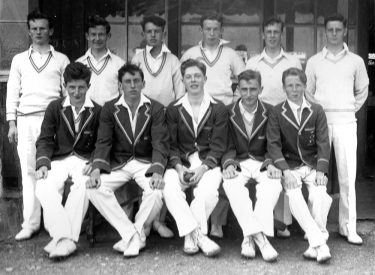 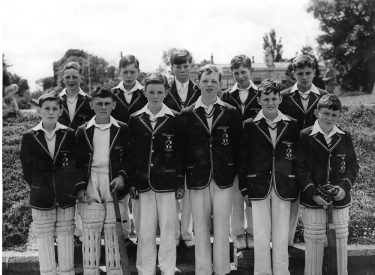 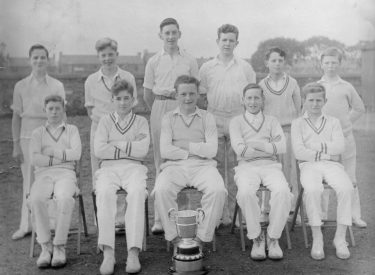 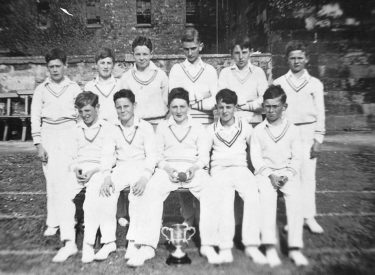 When Mr. Frank Barry CSSp came as prefect in 1938 and when he returned as priest in 1944 the game received a great impetus. He became renowned in Leinster cricketing circles and among our alumni. The fine liaison with Leinster Cricket Club, that still persists, was established.

In 1945 under the direction of Frs. Segrave and Barry, cricket in the College took on a new look. It was clear that ‘the writing on the wall’ was there for the St. Mary’s Club. It was equally clear that boys should be orientated to the fine Leinster Club on our doorstep. The college grounds were totally inadequate for the playing of the game (At that time the school had not acquired Kenilworth Square). The Leinster Club authorities were approached through the good graces of Mr. Willie Kearns and at once they gave a magnanimous approval for the use of their magnificent grounds.

This, it was felt, would do two things. It would help to promote the game under good conditions and give an opportunity to those leaving the College to continue playing with the premier club in Leinster. They gave the ground for six weeks in the summer and one of their members, Val Buggy, (a former St. Mary’s man) offered to coach the young players. 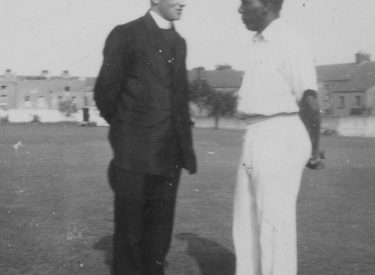 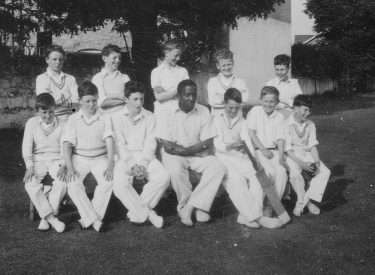 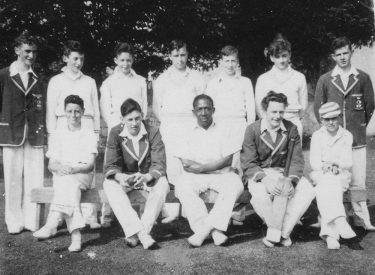 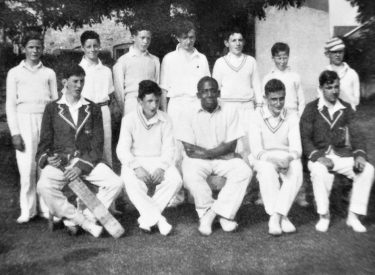 Constantine played for his school cricket team, which he captained in his last two years, by which time he was developing a reputation as an attacking batsman, a good fast-medium bowler and an excellent fielder.

Learie Constantine, Baron Constantine, MBE (21 September 1901 – 1 July 1971) a West Indian cricketer, lawyer and politician who served as Trinidad’s High Commissioner to the United Kingdom and became the UK’s first black peer. He played 18 Test matches before the Second World War and took the West Indies’ first wicket in Test cricket. An advocate against racial discrimination, in later life he was influential in the passing of the 1965 Race Relations Act in Britain. He was knighted in 1962 and made a life peer in 1969.

Learie visited St. Marys in 1947 and is pictured with the teams of the day.

St. Mary’s acquired the Kenilworth Square sports ground in 1948. In the intervening years it has been turned into an adequate cricket ground for the college teams. We have been happy to offer it on occasions to the Leinster Club for some of their matches. The wheel has gone full circle.

There was euphoric enthusiasm among the Junior team in the last term of 1945. The team was a very young one – two years on average under the stipulated under-16 age. On a memorable day in June on the Leinster ground we beat Blackrock College in the final and won the Junior Cup! Gerry Duffy was the hero of that day. He made over 30 not out, when disaster was staring us in the face with five wickets down for ten runs against Blackrock’s total of 65.

We made the score for seven wickets and schoolboy enthusiasm shattered all cricket decorum by carrying Gerry shoulder-high off the field! It would be impossible here to do justice to Gerry’s subsequent career with Leinster C.C. It is well known to all cricket lovers. Another member of that team was Ian Duff. The day of the final was his birthday; he was twelve years old, playing on a Under 16 team!

1948 deserves to be highlighted in the cricketing annals of St Mary’s as the year when a clean-sweep of all three competitions among the Leinster schools was almost brought off.

The Finals were reached in the Senior, Junior and Under-14 Cups. The vision of Fr Seagrave in acquiring professional coaching (George Pope, Test Cricketer of Derbyshire and later J.Harrison and the great West Indian Leary Constantine) and the use of a proper crease in Leinster C.C. at last began to pay dividends. Of course, all the coaching and facilities in the world are of little use if the material is not there, and it was there in abundance that year: John Hughes, capt., Gerry Duffy (lnterpro), Robert Burke (lnterpro), in the seniors; Neil Geoghegan (capt), Bernard Kelly, Ian Kidd-Duff, Tim Harrington, in the juniors; Pat Fitzpatrick (capt), Noel Farley, Fred Cogley, Fred Kelly, in the U-14s.
On the way to the final the SCT defeated St Columba’s, Blackrock and King’s Hospital.

They met old foes Belvedere in the final and won by over 100 runs.

The Juniors beat Belvedere, Mountjoy and High School on the way to a final clash with King’s Hospital whom they defeated 147-65.

The U nder-14s were defeated in the final by Belvedere only after a stubborn fight.

However, they made amends the following year by bringing home the U-14 Cup, Fred Kelly, Sean Cooke and Paddy Dowling shining. The JCT reached the semi-final while Junius Horne was awarded his lnterpro, an honour he would repeat in tennis, table tennis and rugby after he left school.

While of necessity we highlight the successes of the school teams, we do have to remember that none of these successes would have been possible without a cricketing background and tradition which was rooted, not just in the schools matches with other schools but in the house leagues played at every level in the school from Junior 1 to Sixth
Year, and in particular the Holy Childhood League in the Junior School where both a love for the game and the basic skills were inculcated from the earliest age, a task carried out mostly by the successive groups of prefects who were responsible for games in the school under the Dean of Discipline in the ’40s, ’50s and ’60s. It is a matter for regret that the scholastic pressures of the 80s have not permitted the continued enthusiasm for the game in the junior school to bloom in the senior.

Cricket was the main summer game in St Mary’s from its beginnings and retained its importance until quite recently. During the ’30s and ’40s its importance even in the Senior School was almost on a par with rugby. But unlike rugby, excellence at it did not depend on physique to any marked degree, although fitness was as essential as in any other game, and all else being equal, a stronger player was a better player.

The Leinster Branch of the Irish Cricket Union sponsored three schools competitions, a Senior Cup, Junior Cup and Under-14 Cup, while the O’Gorman Cup as we have seen was competed for between St Mary’s and Rock Day-boys. While the 30s did not produce any cup-winning sides apart from the O’Gorman Cup, it did produce some excellent cricketers, notably Fred Scott, who captained the Leinster Schools in 1939, and might easily have had an international career in the game if he had elected to join Leinster or some other senior cricket club rather than throw in his lot with St Mary’s C.C. which had only intermediate status. Other very useful cricketers of that era were Paddy Branagan, Charlie Wilson, the Boyd brothers, Bill, Gerry and Cecil, the Pratt brothers, Richard, Frank and Phil, Matt Collison, Con Duffy, John Honeyman, Niall O’Connell, the Hooper brothers, Ivor, Barry and Niall, Tommy Kearns, who went on with Gerry Boyd to join Phoenix when the St Mary’s Club folded in 1945, played senior cricket for them and rose to be president in their centenary 192 year.

But it was not until 1945 that the first Leinster Cup was won, and this was the Junior Schools Cup, under the captaincy of John Hughes. Cricket in St Mary’s had received quite a fillip from Frank Barry when he came as a prefect in 1938, and even more so when he returned in 1944 after his ordination. He took charge of a JCT that had done well in the O’Gorman Cup the year before. He was aided in his efforts by Fr Seagrave who negotiated with Leinster Cricket Club, just across the road from St Mary’s, for the boys to practise on a decent cricket square and receive coaching from the club which was and remains today one of the premier cricket clubs in the country. All this bore fruit in 1945 when the Juniors brought back to St Mary’s the first cricket trophy since the Senior Cup win of 1916.

In 1936-37 good wins were recorded over Wesley and Rock, but Rock Day Boys won the O’Gorman Cup despite one resounding defeat by St Mary’s, 52-11 !

World War II made its presence felt in numerous ways, even in the cricket sphere. Imported luxury items were at a premium during the war years, including cricket balls. It became impossible to get them. The factories in England were geared to far more important matters. The result was that most games were played with balls made from a
cork composite which did not stand up to the wear and tear of the game and would soon take on any shape but the spherical. They did little to improve cricketing technique.

The 1940-41 O’Gorman Cup final was won by St Mary’s, 96-20, while the following year saw a repeat with another comfortable win.

They accounted for Sandford by 5 wickets in the cup and then had the narrowest of wins,
by 2 runs, over Rock before going under to Belvedere in the semi-final. It was the best
run for years.